The WGSS community has lost a longtime and respected colleague. Dr. Catherine Schuler, Professor Emerita of Women, Gender, and Sexuality Studies, died on November 7, 2022 from metastatic cancer. She was 70 years old.

Dr. Schuler was a brilliant scholar, ardent teacher, and creative performer and director. She earned her Ph.D. in Theatre History and Theory/Criticism from Florida State University. She joined the Department of Women, Gender, and Sexuality Studies in 2011 and had previously been a faculty member in the School of Theatre, Dance, and Performance Studies. Schuler’s major areas of research were Gender in Russian Theatre, Performance, and Culture; Historical and Contemporary Avant-Garde Performance; and Gender and Performance Drag.

Professor Schuler taught a wide range of courses including “From Lenin to Pussy Riot: Gendering (Post)Soviet Russia” and “Women and Comedy: History, Theory, and Practice.”  She was a challenging and demanding teacher who also reveled in the ability to hone students’ skills and to introduce them to new experiences on and off campus. Thomas Voracek, WMST B.A. 2013, recalled “Dr. Schuler was a fantastic teacher and mentor. She held students to high standards and was ready to be there for those who were wanting more opportunities to explore their passions. I wouldn’t have been able to study all the varied topics and specialized areas I wanted to research without her guiding presence.”

Professor Emerita Deborah Rosenfelt notes “Catherine both taught and performed queer studies before it became an identifiable field. She was a gifted teacher, demanding but unfailingly interesting. I had the good luck of team-teaching a course with her on women, gender, and performance, and learned a great deal from her, not only about content but about how to engage students in serious discussion about challenging issues concerning gender and sexuality.”

Professor Elsa Barkley Brown remembers Schuler as someone who “loved debate,” saying “she challenged students to think critically and she enjoyed the debate and getting to talk with them about their ideas. She was one of the most steadfast participants in the undergraduate student organized Social Justice Hangouts.  She would bike in on Wednesdays ready for their topic of the day, eager to parlay ideas, often pulling up some music for the group’s consideration, encouraging an exploration of humor as a way into political ideas. It was also important to her that students get out of the classroom and explore the resources of our area.  All her classes included out-of-the-classroom excursions. Students in her “Cultural History of Drag” would join her at Nellie’s Drag Brunch. Others were introduced to Pinky Swear Productions or other DC-based feminist theatre companies. For several years Catherine drove Women’s Studies undergraduates to North Carolina to the annual spring Duke Feminist Theory Workshop. From both Catherine’s and the students’ reports the conversations on the road to and from were invigorating debates; these often extended into the department hallways for weeks after the trip.”

Jane Donawerth, Professor Emerita of English and Classics, recalls, “I met Catherine in the Women’s Studies Polyseminar over three decades ago. She was a wonderfully difficult person who never met a challenge she didn’t want to overcome. She patiently (sometimes laughing at our gasps) explained feminist performance art to all of us, for a decade supplied performances with her students for “Attending to Early Modern Women” conferences (including a gender reversal Dr. Faustus), and was a great companion to the theatre in Washington (most recently to see “A Strange Loop” with an audience full of UM emerita from WGSS.)” 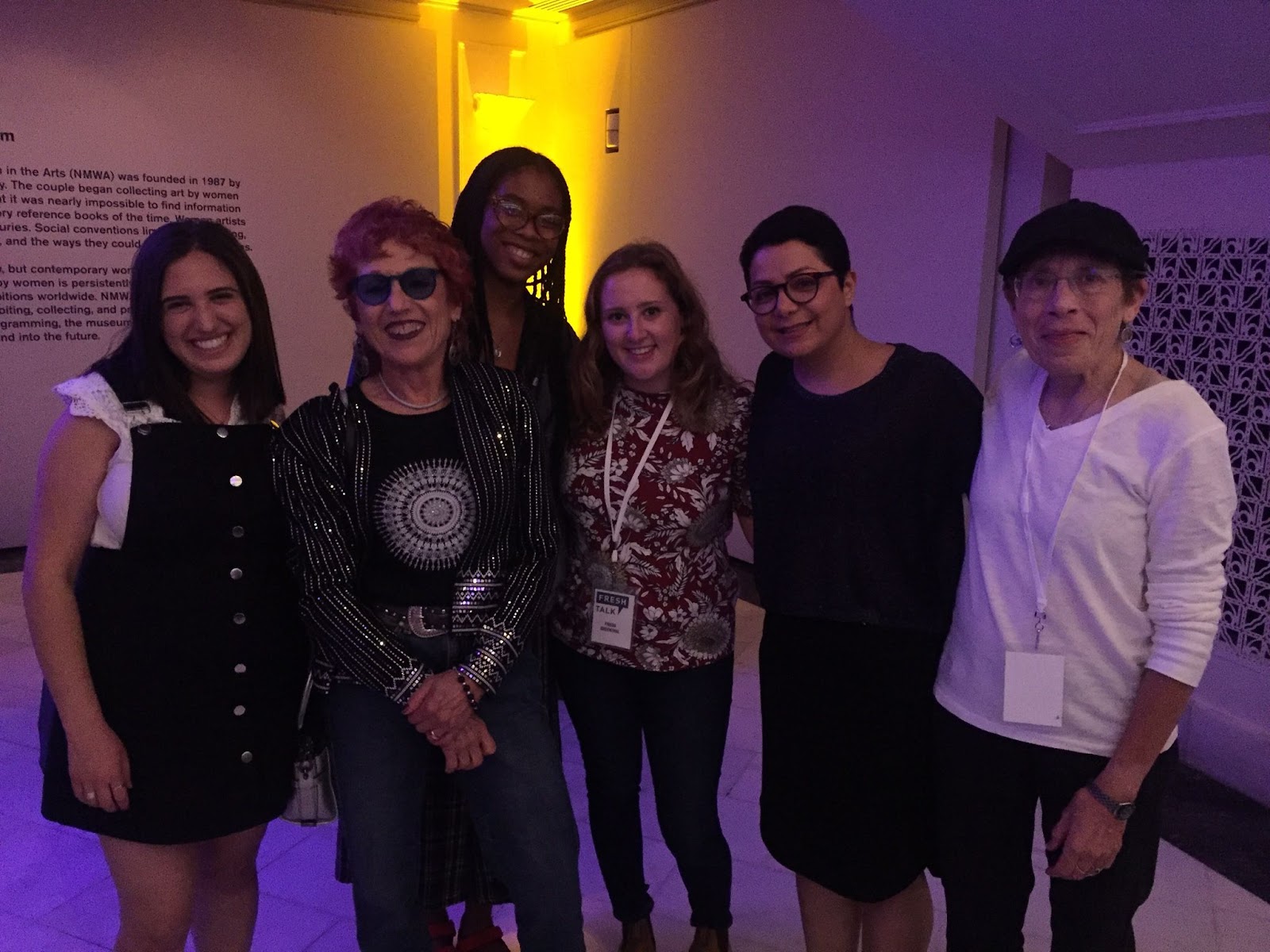 At the National Museum of Women in the Arts in 2017 introducing her “Feminist Reconceptualizations of Knowledge” students to Judy Chicago.

Catherine’s engagement with students often didn’t stop at graduation. Sarah Singer, who graduated with a B.A. in Women’s Studies in 2013 and now is a professor of English at University of Central Florida, remembers “Catherine was the first person who made me feel like I could become a professor. Although I had been her undergraduate TA just a few years prior, our roles reversed on a sunny fall afternoon while we were out to lunch: I started talking, and Catherine started taking notes. Despite the challenges inherent in a long teaching career, Catherine's love of learning never diminished. She supported me from afar through my PhD studies and the first years of my job as an assistant professor. She reiterated her belief in me during every step of the process, and she often reminded me, ‘Don't drive yourself crazy unless you really have to.’ I already miss her.”

Speaking of Schuler’s scholarship, Rosenfelt notes “her work on masculinity in representations of Putin, and on the challenges to his regime from Pussy Riot, was both witty and prescient.” Schuler was the author of Theatre and Identity in Imperial Russia (Iowa UP, 2009) and Women in Russian Theatre: The Actress in the Silver Age (Routledge, 1996). She also coedited Theatre and Feminist Aesthetics (Associated University Presses, 1995) and published articles and book reviews in Theatre Journal, TDR (The Drama Review), Theatre Survey, Theatre Topics, Theatre History Studies, Theatre Research International, and Slavic Review. Most notably, she served as the editor of Theatre Journal, the leading peer-reviewed journal in theatre studies in the U.S.

Her awards, honors, and fellowships were numerous. Most recently, she was a fellow at the Wilson Center in Washington, DC, where she was working on a book about Putin’s performances. Over the years, she earned the Barnard Hewitt Award for Best Book in Theatre History (1997), a Fulbright Fellowship (2004), the Heldt Award for Best Article in Slavic Women’s Studies (1993), IREX Short-Term Travel Grant (1998), and seven UMD research grants, as well as two American Society for Theatre Research fellowships. For her innovative and memorable teaching, she received three University of Maryland teaching awards and a Phi Kappa Phi mentoring award. Dr. Schuler’s inventive productions, especially her gender-reversal versions of Dr. Faustus and Peter Pan, have left a lasting impression on the theatre community.

Valerie Orlando, Professor of French and Francophone Literatures and Cultures recalls,  "Catherine was a wonderful colleague and I enjoyed the conversations we had about strong women warriors in the literatures of the world". And Rosenfelt adds, “it’s important not to forget that she was also a fine actor. I saw her perform memorably in the title role of The Singular Life of Alfred Nobbs at the Clarice. She was terrific! Her sharp intelligence, her ability to bridge theory and practice, and her passionate enthusiasm for her work will be sorely missed.”

Outside of her work at Maryland, Dr. Schuler was an avid biker.  Professor Michelle V. Rowley observed “Catherine was more than an avid biker; she had some speed to her. I often saw her when walking along Sligo Creek and really she would whiz by, I only knew it was her because of her silhouette in the distance.”  She was also a runner, and animal rescue advocate. She fostered many dogs and was particularly fond of dachshunds and corgis. She enjoyed attending theatre performances, visiting museums, and trying out new vegetarian and vegan food offerings in the DC area. On her happiest days, she walked her dogs around her neighborhood in Silver Spring and rode her bike to the Bagel Place of College Park, where she always ordered a spinach cheese melt.

Remembering Schuler, Professor Michelle V. Rowley said, “For many academics, our bookcase is our selfie. To peruse Catherine’s shelves was to get a glimpse of a scholar with stunning breadth, to find evidence of a scholar who was deeply immersed in her field and always dynamically turning her curiosity to new ones. I think one of the ways that Catherine expressed her love for her field was the way that she always looked for opportunities to invite us in – seizing on widespread interest in Pussy Riot, or ensuring that we in WGSS were part of events organized around Masha Gessen’s visit to campus, or in the simple gesture of bringing us all posters from the 2014 Winter Olympics (Sochi, Russia) and then taking the time to translate each recipient’s selection. But, my abiding memory of Catherine will be her wit and her mischief. If you sat next to her in a faculty meeting and depending on her mood, you would be privy to a few choice words uttered sotto voce and if uttered out loud, her laughter became the balm to her incisive observation.  We kept meaning to but never got the chance to have that Rasputin together, Catherine, I will be sure to drink one in your memory.”

Dr. Schuler leaves behind her family, her two dogs, and many friends in the U.S., Russia, and Finland. A memorial service will be held on Monday, November 14th at 11:00am (Cedar Lane Unitarian Universalist Church -  9601 Cedar Lane, Bethesda, MD 20814). If you would like to attend via Zoom, please email Dr. Sarah Singer for access details (sarahsinger910@gmail.com). In lieu of flowers, please consider making a donation to one of Catherine’s favorite charities: Second Chance Wildlife Center (http://www.scwc.org/) or Pointless Theatre (http://www.pointlesstheatre.com/)