Our faculty are at the forefront of their fields, producing transformative knowledge across the multiple disciplinary and interdisciplinary areas, within and beyond academia, that constitute women, gender, and sexuality studies.

From Sentimentality to Science: Social Utility, Feminist Eugenics, and The End of the Road

My reading of The End of the Road offers an alternative perspective on American eugenics, its relationship to economic progressivism, and the role of white feminism in shaping these movements.

Given the sensational appeal of Katherine Davis’ The End of the Road, leading to its unofficial designation in The Exhibitor’s Herald as “the most talked about Picture in America” in 1919, it is surprising the film has not received greater critical attention for its peculiarly feminist eugenic vision. Reading The End of the Road alongside other U.S. government hygiene films and contemporaneous journal articles and medical texts, I reveal a different vision of Progressive Era eugenics than that found in the well-known work of Shelley Stamp, Martin Pernick, and Stacie Colwell. Drawing a distinction between what the progressives themselves termed “positive” and “negative” eugenics, I explore hygiene cinema’s unexpected intersection with first-wave feminism, progressive economics, and welfare reform. In so doing, I reveal a window into a nearly-forgotten feminist counter-culture that briefly attained governmental support due to the overlap in membership between the American Social Hygiene Association and the U.S. War Department. At the center of this vision is The End of the Road’s eugenic heroine, Mary, who is neither a wife nor a mother but a college-educated working woman who promotes the “development of oneself for the service of mankind.”

This article makes use of the notion of amateurism to reframe our understandings of Mexican contemporary art of the late 1980s and early 1990s. I look specifically at Sarah Minter’s 1991 feature length video piece Alma Punk to suggest that its deployment of an aesthetics of amateurism indexes the oft-forgotten intersection between punk subcultures and the contemporary art scene of the period. Countering dominant discourses in art historical discussions that subsume Mexican contemporary art to macro-political and economic developments, I situate Alma Punk as an object that allows us to recognise the marginal spaces from which this art emerged. I locate amateurism in this article in close relation to Manny Farber’s idea of ‘termite art’, an aesthetic mode that favors the reach of minor gestures against the will toward mastery found in ‘white elephant art’. Thus, Minter’s work chooses amateurism as an aesthetic mode that approximates the everyday experiences of her marginal subjects.

Anything But Reactionary: Exploring the Mechanics of Backlash

Feminist conceptualizations of backlash have understandably and appropriately centered on women’s experiences, drawing attention to efforts that would, as Susan Faludi noted in 1991, “retract the handful of small and hard-won victories that the feminist movement did manage to win for women.” In this essay, I reengage the concept to ask what we might learn if our point of departure was informed by the experience of blackness. I suggest that rather than positioning backlash as a reactionary response to any perceived gains, centering race allows us to theorize backlash as a condition of modernity. Instead of conceptualizing backlash as a punitive but potentially rectifiable kink, I suggest that backlash-as-condition is an inherent systemic feature that compels us to reimagine the very system that is itself dependent on backlash for its survival and proper functioning.

At what age do girls gain the maturity to make sexual choices? This question provokes especially vexed debates in India, where early marriage is a widespread practice. India has served as a focal problem site in NGO campaigns and intergovernmental conferences setting age standards for sexual maturity. Over the last century, the country shifted the legal age of marriage from twelve, among the lowest in the world, to eighteen, at the high end of the global spectrum.

Ashwini Tambe illuminates the ideas that shaped such shifts: how the concept of adolescence as a sheltered phase led to delaying both marriage and legal adulthood; how the imperative of population control influenced laws on marriage age; and how imperial moral hierarchies between nations provoked defensive postures within India. Tambe's transnational feminist approach to legal history shows how intergovernmental debates influenced Indian laws and how expert discourses in India changed UN terminology about girls. Ultimately, the well-meaning focus on child marriage became tethered less to the well-being of girls themselves and more to parents' interests, population control targets, and the preservation of national reputation.

Debt by Design: Race and Home Valorization on Reality TV

With the election of Barack Obama, the idea that American society had become postracial—that is, race was no longer a main factor in influencing and structuring people's lives—took hold in public consciousness, increasingly accepted by many. The contributors to Racism Postrace examine the concept of postrace and its powerful history and allure, showing how proclamations of a postracial society further normalize racism and obscure structural antiblackness.

From the Assassinations of the 1960s to Stoneman Douglas: Guns, Violence, and White Masculinity in Crisis

This essay explores the racial politics within contemporary anti-black police violence and school shootings alongside those that led to the passage of the Gun Control Act of 1968.

This essay analyzes the current epidemic of school shootings and anti-black police violence in conjunction with the passage of the Gun Control Act of 1968. These two cultural moments— set fifty years apart— are each rooted in the broader discourse of white masculinity in crisis and the insurgence of American nationalism which have intensified during times of great cultural change. In both periods, the impetus to pass gun control legislation is motivated not by the ongoing protests against gun violence facing black Americans, but by a handful of significant events that targeted predominantly white citizens, symbolized by the assassination of President Kennedy in the 1960s and the students of Stoneman Douglas today.

This essay queries the possibility of patenting “life itself” by examining the 2013 Myriad Genetics Supreme Court Case alongside the fictional patenting of the human genome in Orphan Black.

Connecting the real-life patenting of genes to the fictional patenting of the human genome in the TV series Orphan Black, I demonstrate how the neoliberal shift towards privatization is reframing the question of private property, specifically what Donna Dickenson refers to as “property in the body.” While the modern legal subject had ownership over its body, the meeting of eugenic science and intellectual property law today begs the question: to whom does the body and its self-reproducing parts belong? In a departure from the distinction Melinda Cooper draws between the germ and stem cell line, I contend that the 2013 Myriad Genetics Supreme Court Case has created an ideological loophole towards patenting “life itself” and Orphan Black provides an explanatory tool for how the modern legal system is structured by corporate pressures and a mode of legal interpretation that privileges private property rights. My argument unfolds via an examination of Orphan Black’s Leda (female) and Castor (male) clones’ synthetic DNA on three levels: as the object of an intellectual property patent, a mechanism of surplus life and sterility, and a sexually-transmitted virus or bioweapon. By investigating the differences in how the Ledas and Castors are affected by—and affect others through— their synthetic biology, we gain real-world insight into how cultural understandings of gender and sexuality are shaping the development of new scientific technologies and their adjudication in the courtroom. In its entirety, this essay reveals how the larger projects of neoliberalism, capitalism, and advanced scientific technologies are molding the eugenic project as it reemerges as 21st century genetic engineering.

From Transformative Works to #transformDH: Digital Humanities as Critical Fandom

Digital humanities is an amorphous and contested field, network, discourse, or discipline. Lothian argues that it is best understood as a fandom—and that there is much to learn from attending to processes and practices of scholarly field formation through lenses developed by fan theorists, practitioners, and scholars. This approach positions digital humanities as operating in excess of institutional logics, treating the affects and conflicts that accompany discussions of digital scholarship as sites of knowledge production in themselves. The article show how the lessons of media fandom's subcultural knowledge production can apply to digital humanities' scholarly networks, calling attention to gendered and racialized power dynamics. Operating both within and in critique of academic digital humanities, the collective movement of #transformDH demonstrates how critical fandom might operate as a methodology for a transformative digital humanities whose goals and ethics do not rely on academic disciplines and institutions.

Read More about From Transformative Works to #transformDH: Digital Humanities as Critical Fandom

Alexis Lothian's book traverses the history of imagined futures from the 1890s to the 2010s, interweaving speculative visions of gender, race, and sexuality from literature, film, and digital media. 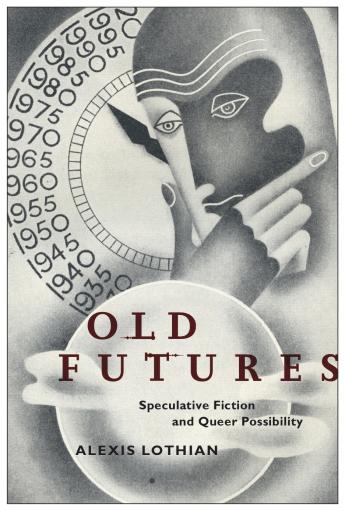 Narratives of possible futures provide frameworks through which we understand our present, but the discourse of “the” future has never been a singular one. Imagined futures have often been central to the creation and maintenance of imperial domination and technological modernity; Old Futures offers a counterhistory of works that have sought—with varying degrees of success—to speculate otherwise. Examining speculative texts from the 1890s to the 2010s, from Samuel R. Delany to Sense8, Lothian considers the ways in which early feminist utopias and dystopias, Afrofuturist fiction, and queer science fiction media have insisted that the future can and must deviate from dominant narratives of global annihilation or highly restrictive hopes for redemption.

Consortium on Race, Gender and Ethnicity, The Harriet Tubman Department of Women, Gender, and Sexuality Studies

By Ruth Enid Zambrana, professor and interim chair of women’s studies, director of the Consortium on Race, Gender, and Ethnicity

"Toxic Ivory Towers," seeks to document the professional work experiences of underrepresented minority (URM) faculty in U.S. higher education, and simultaneously address the social and economic inequalities in their life course trajectory. Ruth Enid Zambrana finds that despite the changing demographics of the nation, the percentages of Black and Hispanic faculty have increased only slightly, while the percentages obtaining tenure and earning promotion to full professor have remained relatively stagnant. Toxic Ivory Towers is the first book to take a look at the institutional factors impacting the ability of URM faculty to be successful at their jobs, and to flourish in academia. The book captures not only how various dimensions of identity inequality are expressed in the academy and how these social statuses influence the health and well-being of URM faculty, but also how institutional policies and practices can be used to transform the culture of an institution to increase rates of retention and promotion so URM faculty can thrive.