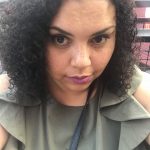 Sydney F. Lewis, Ph.D. is a lecturer in the Women’s Studies Department. She received her doctorate in 2012 from the University of Washington, English Department. Focusing on 20th and 21st century African-American Culture, Black Feminisms, and Queer and Gender Studies, her dissertation entitled Looking Forward to the Past: Queering Black Female Sexuality in “Neo” Cultural Productions, combines black feminist theory, cultural studies, and queer theory with critical readings of African-American cultural productions in order to consider how black women can and have configured their non-heteronormative sexualities outside of the language given to us by white-dominated LGBTQ scholarship.

A Baltimore-area native, Sydney Lewis received her B.A. in English and Psychology from University of Maryland, Baltimore County Honors College where she was a recipient of the Humanities Scholar Fellowship. She earned her Master’s degree from the University of California, Santa Cruz in the History of Consciousness Program where she studied queer theory, race, and psychoanalysis. Continuing a history of interdisciplinary work, Lewis pioneered innovative courses at the University of Washington, Bothell including courses exploring representations of race and gender boundary crossing and a popular course on burlesque history, performance, and feminism.

Lewis’s work and teaching strives to blur the boundaries between the academy, art, and activism. Her areas of interest include gender performance and performativity, black feminist theory and culture, and intersectional black liberation. She is currently co-authoring a photobook of nationwide LGBTQ+ performers with photographer, Chris Jay.